Children of Lovecraft rides out!

We've talked about this before at the Yard: my novelette "Jules and Richard," and its inclusion in Ellen Datlow's Children of Lovecraft anthology--with its all-star lineup of weird writers, its Mike Mignola cover, its editorial pedigree. Well. Dark Horse has let it free this week, and its available all sorts of places: Amazon, Barnes & Noble, Chapters-Indigo. 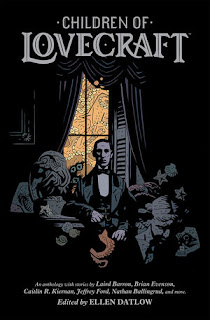 When Ellen invited me to submit to the anthology, she made the premise very clear: she was looking for stories that were inspired by Lovecraft without pastiching him. No tentacles, was I believe a direct commandment.

Well, there's no tentacles in "Jules and Richard," although it does take a pretty direct stab at one of Lovecraft's more famous stories (not necessarily a Cthulhu Mythos piece). So yeah, no tentacles.

But Ellen didn't say anything about avoiding bicycles. And so, I did take a rather more direct inspiration from my single most serious bike accident a few years back, that did a real number on my shoulder, and also my dignity.

With that in mind: Here's the first bit--the bit about bicycles--of "Jules and Richard."

“I was crossing back there...”

Jules pointed, with his good arm, to the intersection a dozen meters to the east, just beyond the tangle of his once reliable old commuter bike: “… and as I was building up speed--”

“Over I went, said Jules. He thought about it a moment, his mishap. “Stupid. I was checking to make sure I had my glasses in my pocket.”

“You don't have them now though.”

“They fell out,” said Jules.

The glasses had fallen into the shadow of the exhaust pipe of a parked van. Jules couldn't see them, but she rose to fetch them and returned them to Jules. They were new glasses and they weren't cheap.

He put them on, and blinked at his rescuer.

“Funny. I thought you were older,” he said, and immediately apologized. “I'm a little shaken up,” he explained.

Well, it was pretty scary at the time...