If I'll go to these lengths to promote a 10-year-old book... 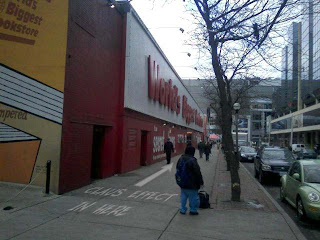 A few posts back, faithful yard-apes may recall a certain gleeful noting of the fact that 10 years after it was published, the World's Biggest Bookstore (shown above) in Toronto finally decided to stock a few copies of The Claus Effect, Karl Schroeder's and my novel about a nuclear-age Santa Claus and the children who must destroy him. Four copies they stocked, which I managed to sign and over successive lunch-hour loiterings, watch trickle out at a rate of ... well, of one.*

You might think that was the end of it. Well no, it's not. The good people at The World's Biggest Bookstore apparently took note of that one, righteous sale -- and, even granting the prospect of hard-scrabble times ahead in the book-mongering trade, they looked at the cover, looked at the calendar, and seized an opportunity that no one has seized since the old Bakka Science Fiction Books set up that first window display in the fall of 1997.

They ordered a bunch of copies for the holiday season, and put them in this section of the bookstore: 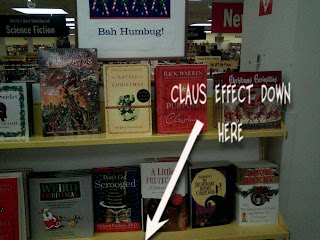 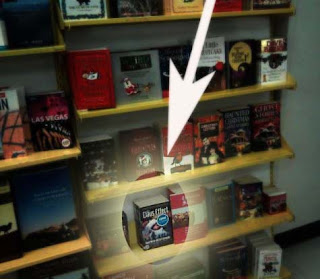 That, you might think, would be quite enough. But there's more. Over in the science fiction and fantasy section, they took another four copies and put them here: 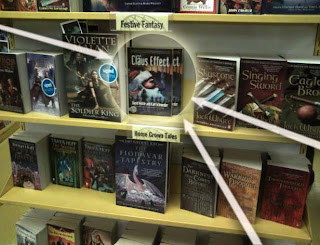 And, in the juicy core of the science fiction/fantasy section proper, right before Douglas Niles, where a Nickle book should go, here: 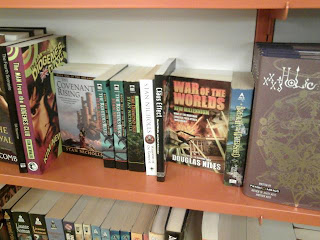 So. Ahem. It's Christmas coming up. The World's Biggest Bookstore (on Edward Street, between Yonge Street and Bay Street, just north of the Eaton Centre at Yonge and Dundas) has gone out on a limb and actually ordered a significant stack of this creepy, violent, foul-mouthed, Bill-O'Reilly-baiting-War-Against-Christmas novel of cherubic mayhem from the 1990s. On Tuesday, there were (yes, I counted) eleven copies there -- a sizable percentage of the remainder of the print run, if I'm not mistaken.

Yard-apes, you have your mission.

***
* Thank you, lone book-buying Yard-ape. Your reward is in Heaven.